Hi everyone. Just wanted to let you all know that my dairy, wheat, sugar, and egg elimination diet resulted in no strange findings for months and months. It seemed that this special diet completely eliminated the rope worms.

Recently I went off the diet; having several sodas and some chocolate cake, even some bread and eggs, and I got a “baby ropeworm” today. Oh no! 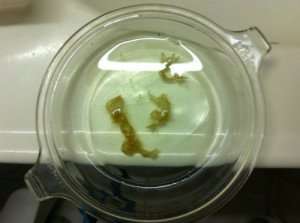 But I am now convinced these things that I used to get all the time are not ropeworms. They look like ropes, because they are wound up, but if you unfold them, in water, it becomes clear they are a sheet, or “film,” of something or other ..

I am convinced now they are not worms. They have no digestive system; no organs. Could they be biofilm? Or my own intestinal lining shedding?

I do believe that this that originally came out of me was indeed a worm; a tapeworm; a ropeworm, or whatever, but these mucous strands are not worms.

Could it possibly be candida biofilm? The sodas would explain that …

But another thought, is that they are a result of irritation caused by GMO’s. Just think; the BT corn is designed to rupture the stomach of an insect – how would a human gut protect itself? By shedding the damaged layer. And what is soda pop full of? High fructose CORN syrup.

Also I decided to do an experiment. I decided to pour some hydrogen peroxide on the “worm”. This is the result. 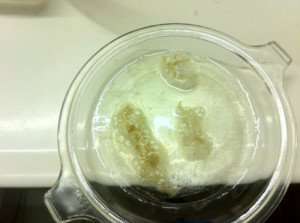 There was a lot of gas being released as the hydrogen peroxided reacted with the mucous . Any chemists out there? What does this reaction mean? When I put the mucous into alcohol nothing happens.

Perhaps those of you who find rope worms, could put them in water, and see if they unfolds into a sheet. And experiment to see what substances react with them so that we may eventually solve the mystery of what these rope-like substances that cause so much discomfort and bloating really are.

All you ever wanted to know about coffee enemas: drjockers.com/detoxify-body-coffee-enemas/ ... See MoreSee Less

Detoxify Your Body with Coffee Enemas

Coffee enemas are an unusual but renowned therapy to help detoxify the body and improve liver and bowel health. Learn how to do them at home!
View on Facebook
· Share

Rope Worms a Cause of Allergies, Food Intolerance and Bloating? | Organic Allergy Relief

What is Rope Worm? This is an extremely interesting topic to me because it’s like a modern health mystery that seems to be closing in on a conclusion. However, I should warn you that this subject ma...
View on Facebook
· Share